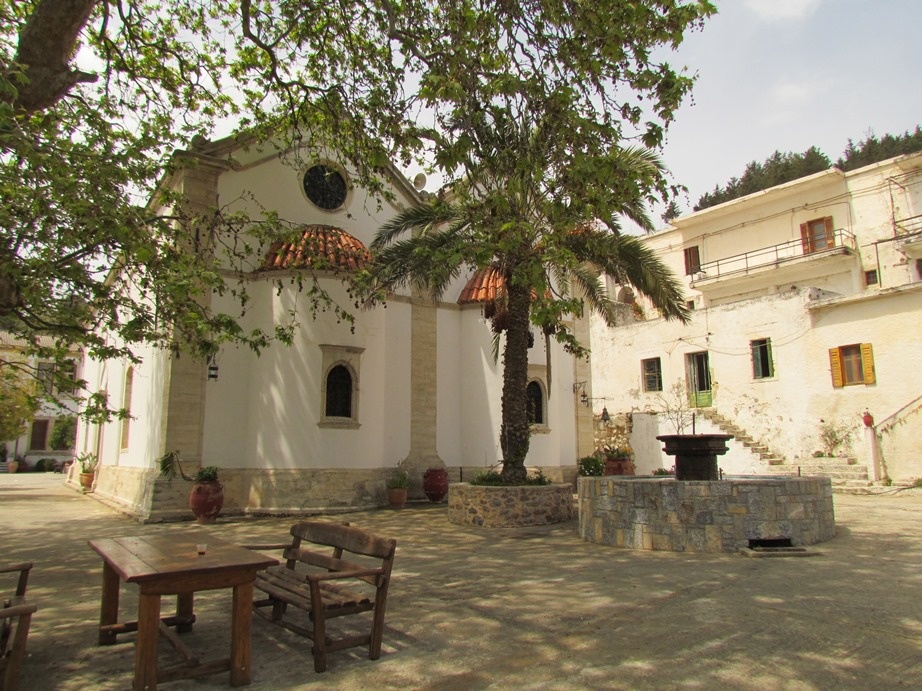 The Monastery of Agios Georgios [St. George] Apanosifis or ‘Epanosifis’ is one of the more populous and famous monasteries on Crete.

It was established at the end of Venetian rule and soon gained a lot of fame. As a result, it became one of the biggest pilgrimage sites on Crete.

the monastery was founded at 1600 by Brother Paisios, a monk travelling from the Apezana Monastery to Agarathos Monastery. He spent the night at the property of Venetian Lagouvardos, near Kako Horio (present-day Metaksohori), and built Epanosifis Monastery after a visitation by Saint George himself in a dream. Over the years, the inhabitants of the surrounding villages contributed to the efforts. Later, monks arrived from nearby monasteries and each built their cell using their own financial means.

The name Epanosifis was given by Lagouvardos, who used to be the ruler of the area and employed two shepherds both named Sifis. To tell them apart, he called them Epanosifis (upper Sifis) and Katosifis (lower Sifis). That was how the name Saint George of Epanosifis came to be.

During the Ottoman occupation (1645-1669), the Epanosifis Monastery started to develop and gained its first significant possessions. By the 18th century, the Monastery was flourishing. Most travellers who visited Crete also stopped at Epanosifis Monastery and many of them recorded information on the monastic society, the Monks’ customs, the monastery’s spiritual achievements as well as the structure of the building complex.

The Monastery’s spiritual and social contribution during the Ottoman rule was invaluable. The Monks helped both travellers and struggling Cretans. The Monastery housed a school and a rich library. At the same time, scholarly Monks living at the monastery copied books, wrote hymns and preached.

The Monastery’s spiritual achievements and its economic development continued until the years preceding the Greek Liberation War of 1821, which was a decisive point in the Monastery’s life. A lot of monks were slaughtered by the enemy, while heirlooms were sold to buy arms.

The holy fathers of the Monastery together with Abbot Sofronios played an active part in the revolution of 1866. Most monks joined revolutionary groups such as the one led by Michael Korakas. Elder monks, along with heirlooms and holy vessels were temporarily moved to the Apezana Monastery. During that time, the Christian Church committed to supporting the schools of the island with the monasteries’ income. The high income of Epanosifis Monastery was used to pay teachers who had undertaken the children’s education during a very trying time for Crete.

In 1941, the Epanosifis Monks participated in the Battle of Crete. The Abbot’s room was turned into a hospital for the wounded and more than 100 urban families took refuge at the Monastery. The Monastery offered great assistance to fighting Greeks, despite the fact that it had been looted by Nazis a number of times.

As evident from the Archives of the Elders’ Council (local Greek council managing community affairs under the Ottoman occupation) located in Heraklion, the Monastery held a lot of property, not only in the Municipality of Heraklion but also in Ierapetra, Meramvelo, Viannos and Lasithi Plateau. Dependencies and property owned by Epanosifis Monastery can be found throughout Crete. Its contribution to the local people is also great (Construction of an orphanage and the Heraklion home for the aged, contribution to the construction of the Church of St. Minas and the Archdiocese of Heraklion etc.).

The katholikon (the church) stands in the centre of the monastery courtyard. It is a two-aisled basilica. The right aisle is dedicated to Saint George and the left to the Transfiguration of the Saviour. The foundations were laid on 5 March 1861 and construction was completed on 22 April 1863. The wooden iconostasis is intricately carved with depictions of rare scenes.

The miraculous icon of Saint George, largely covered in valuable votive offerings and oblations, can be found on the left side of the katholikon.

Through the centuries, the monastery nurtured individuals of great spiritual stature who, through their life and actions, succeeded in rising to high-ranking ecclesiastical positions.

A specially constructed two-storey wing houses the religious museum and library. The museum, equipped with state-of-the-art technology, features old icons, Gospels, heirlooms and vessels as well as other artefacts. The Monastery also houses a number of holy relics of saints. In the Monastery yard is the Fountain of Holy Water, discovered when Miliaras, a devout Christian, was visited by Saint George in a dream.

Epanosifis Monastery holds celebrations twice a year, and scores of churchgoers participate: one on 23 April, the feast honouring Saint George’s martyrdom, and another on 3 November, the date of the translation of Saint George’s holy relics.

The Longobardi Tower in Livadia, Monofatsi.

To the east of St. George’s Epanosifis Monastery sat the hamelt of Livadia until 1671. The hamlet was a feudal land of the Patriarchy of Constantinople, which rented it to various individuals. In 1332 the tenant was Georgios Dalaportas and in 1450 it was Stephanos Foskarini. During the last centuries of Venetian rule on Crete (16th-17th century), the area was the fiefdom of the Longobardi, who had helped found Epanosifis Monastery. One of the family members was a monk there.

The Longobardi built a tower in order to strengthen their position in the region, the ruins of which survive to this day on a hill that looked over the hamlet.

On Easter Monday, the feast day of Saint George, many people visit the monastery to venerate the saint. Often, on that day, the monastery is visited by an equestrian club, and ‘georgalidika’ or Mesara horses—a rare Cretan breed—parade ahead of the procession of Saint George’s icon around the monastery grounds. Visitors are drawn to the races held a short distance from the monastery. These races are connected with Saint George, as he was a military saint who is often depicted on horseback.