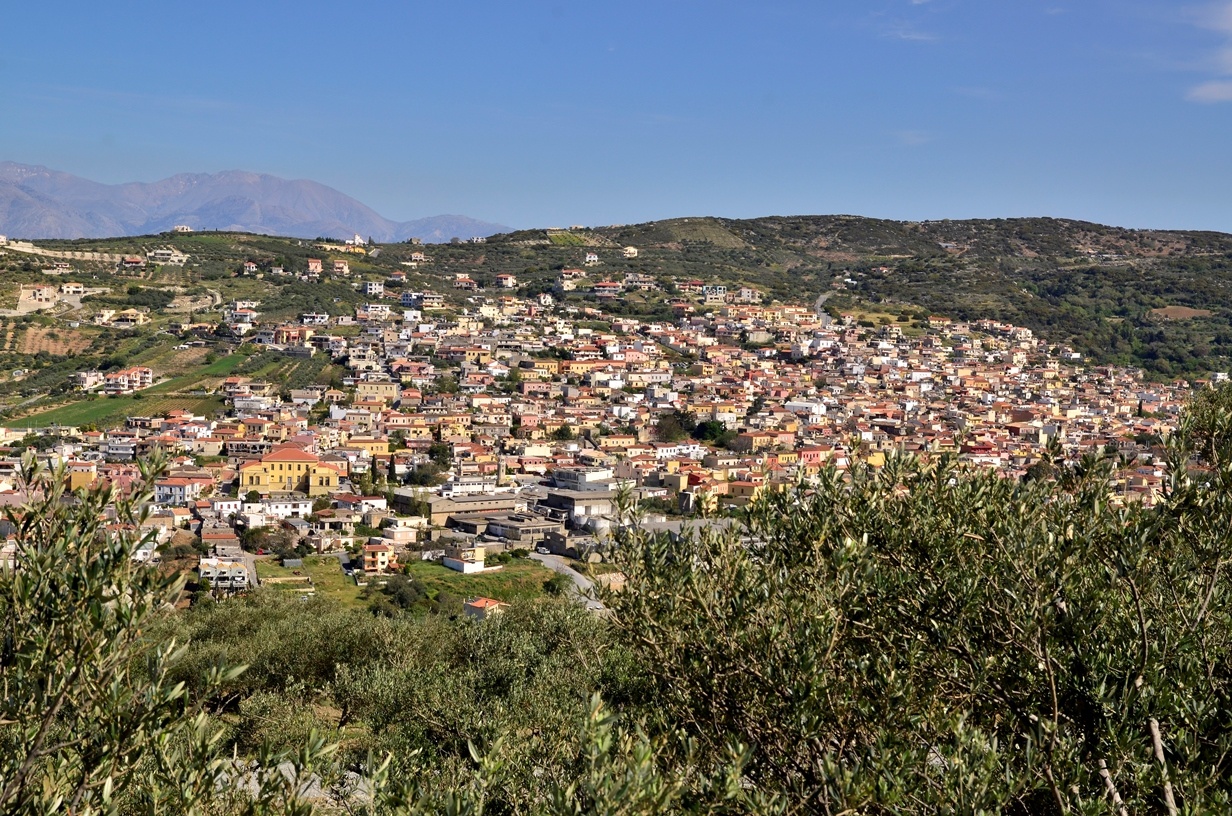 The Archaeological Collection is housed in a neoclassical building of the previous century in the district of Tzami; in the yard there is a bust of the archaeologist Yannis Sakellarakis, erected by local residents to pay homage to his work.

Until 1993, when the Archanes Museum was inaugurated, findings from this region were at Heraklion Archaeological Museum. Even today, for security purposes, the Archanes Archaeological Collection includes mainly ceramic and stone vases and exact copies of the most significant finds of this area.

Still, the way the finds are displayed in the elegant glass cases and the explanatory signs accompanying them help visitors form an overall picture of life in Minoan Crete and the importance of the Archanes finds in shaping our picture of the Minoan civilisation.

The neoclassical building of the museum was built in the 19th century to house the first school of the town. The display is presented in a single hall, in glass cases along the walls and in the centre of the hall.

Entering the hall, visitors move from left to right. The first six glass cases (1-6) contain finds from the Minoan cemetery at Furni Hill in Kato Archanes (Lower Archanes). The cemetery was used for more than a thousand years, from about 2400 until 1200 B.C. The excavation was important because of the information it provided on the funereal customs and the organisation of cemeteries during that period; it contains hundreds of burials and artefacts from Minoan vaulted tombs to Mycenaean pit-like tombs, sacrifices, funereal dinners and auxiliary constructs of the cemetery.

Glass Case 1 contains reproductions of Cycladic statuettes from tombs at Fourni, which confirm the relationship the island of Crete had as early as the 3rd millennium B.C. with the Proto-Cycladic Civilisation flourishing at the time.

Glass Case 2, containing artefacts from the Old-Palatial period, displays, among other things, jewellery made of ivory, a pair of silver earrings and tiny clay animal statuettes. In the corner of the hall, in a suitably laid out area, the burials are on display, as they were found at Fourni cemetery. You can see three clay sarcophagi with their lids, which contain the burial of a man and a woman and three funereal jars, which were usually used for children’s burials. The dead were buried in a contracted position, i.e. with their knees folded against their chest, as the skeletons on display show.

Glass Cases 4 and 5 present the ceramic art of Fourni from the pre-Palatial and early Old-Palatial periods. These are hand-made ceramic objects of various shapes, with simple linear drawn decoration. In Glass Case 4 notice the reproduction of the ceramic sistrum (rattle-like instrument) found at Fourni. It is a musical instrument known to us from the scene on the ‘Harvesters’ Vase’ on display at Heraklion Archaeological Museum. A detail of the scene that depicts musicians, one of whom is holding a sistrum and singing, is displayed next to the sistrum. Glass Case 6 contains sarcophagi with children’s burials and various funereal vases, including a pot (chytra).

Wall mount VII, Glass Case 7 and the three giant jars to its right are related to sanctuary and worship practices. The most important findings here are from the sanctuary excavated in Anemospilia. The sanctuary dates back to the beginning of the Neo-Palatial period and was destroyed by an earthquake around 1700 B.C. Within this sanctuary archaeologists discovered the skeletons of three humans who met their death from the falling roof and walls during the earthquake. They also found the skeleton of a human tied on an altar. They assumed that there was a human sacrifice in progress here during the earthquake, in an effort to exorcise evil. In Glass Case 7 there is a reproduction of the clay feet from the wooden statue of the goddess standing in one of the sanctuary rooms, a reproduction of the copper sword used for the sacrifice and a cast of the seal on the dead person’s wrist, who is believed to have been the priest. The three giant jars were found in the same room as the statue of the goddess. Glass Case 9 contains a concise representation of daily life activities during Early-Palatial times. The warp weights (agnythes) from the looms of the time have been preserved, as well as cone-shaped cups containing traces of dyes used to colour the textiles; there are also ceramic pots (chytres) with food remains, informing us about the Minoan diet. The storage jar on display right after Glass Case 9 was found in a Minoan rural residence in the area of Archanes and it is decorated with plastic motifs of excellent craftsmanship.

The rows of handles were used for ropes to be passed through so it would be possible to transport it. In order to form a more complete picture of daily life in Minoan Crete, backtrack across the hall, opposite Glass Case 7. The centrally positioned glass cases display a clay grape stomping vat (lenos). This object was found at Fourni, but similar ones have been found in many Minoan sites, since winemaking was one of the main trade activities of the island.

The sign next to the stomping vat presents a picture of land and marine transport means of the time. Going back to Glass Case 11, you can see ceramic items from the Neo-Palatial Period. The vases on display here were found in the Palace building being excavated in the heart of the village, in Tourkogeitonia district. Glass Case 12 is dedicated to stone works. There are stone vases made of various ores as well as stone tools and spindle components. Glass Case 13 contains a number of fragments from clay vessels (ostraka) from various periods, found in Archanes. It is worth taking a moment at this case to see how ceramic styles developed and differed with time. The time sequences of ceramic styles are used by archaeologists to date the various phases of an excavation site. Glass Case 13 concludes your tour of the series of wall-mounted cases. You can now proceed to the group of glass cases in the middle of the hall. Start with Table I, opposite the entrance, which depicts the excavation of the palace at Tourkogeitonia. Moving to the left, this is what you will see in turn: a stone throne found in the palace (Exhibit 14), a libation vase in the shape of a bull from Fourni (Exhibit 15) and fragments of murals found in the palace building (Exhibit 16). Sign X and Glass Case 18 present items made of ivory and found in Archanes. In Glass Case 18 you can admire an ivory comb found in the Mycenaean cemetery grounds at Fourni, which is decorated on both sides with pairs of lizards in relief. Above this case you can see the double bull-horns made of tuff. We are not in a position to know the exact symbolism of the ‘horns of consecration’, as scholars call them, but they are definitely a sacred symbol of the Minoans, which appears in palaces and sanctuaries, as well as on all ritual utensils. Glass Case 19 presents a tripod-altar, which is also associated with worship. To the left of this there is a tall lamp, like those used to light the rooms and corridors of Minoan buildings. The last two exhibits are Archanes findings from the historical period. There is an altar from the 1st century A.D. (Exhibit 22) and the marble head of a young girl from the 3rd century A.D. (Exhibit 23), which indicate the importance of the years following the destruction of the Minoan civilisation and the continued inhabitation of the region until our times.