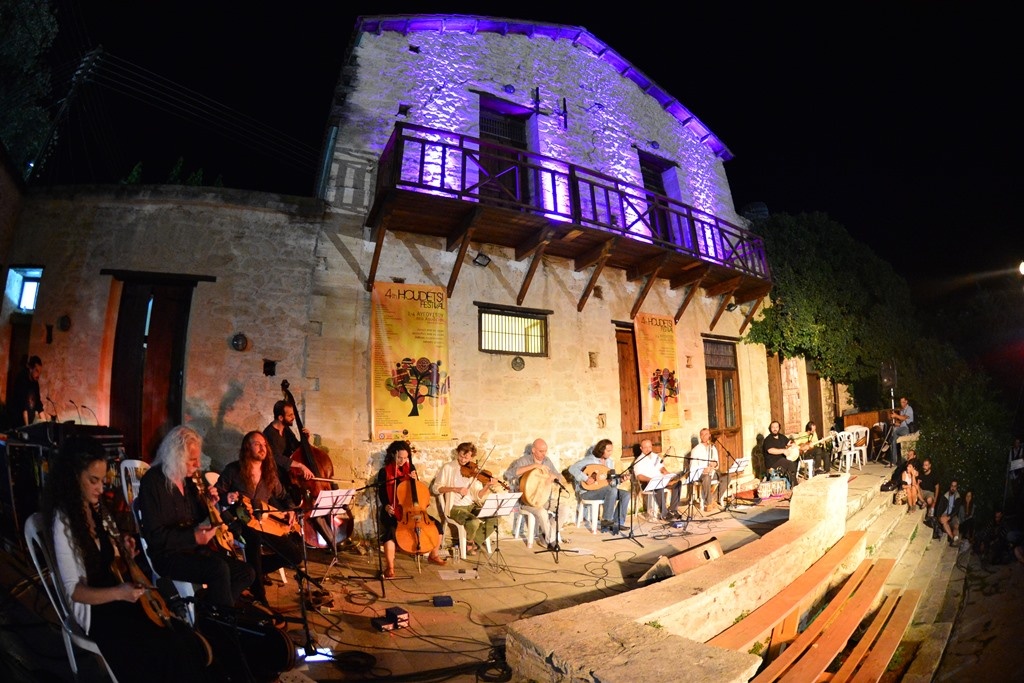 We’re not referring to the Minoan Labyrinth, but the ‘Labyrinth’ Music Workshop, which has been operating for 15 years in Houdetsi and has literary changed the musical landscape of the area, if not the entire island. Founded by Irish, now Cretan, or rather citizen of the world Ross Daly, ‘Labyrinth’ has managed to be a point of reference for the entire area, attracting hundreds of young people and creating a new generation of musicians who bring tradition back to life in creative ways.

The workshop’s purpose is to initiate its participants in a creative approach of musical traditions from pretty much all over the world. Not limited to that, it holds specialised seminars for modal instruments year-round, concerts, festivals, recordings and other events promoting research in folk music. Besides the promotion and development of music and culture, the case, or rather the phenomenon of the ‘Labyrinth’ workshop constitutes an excellent example of successful local development for the Municipality, since it strengthens community ties through the creation of approaches and values that promote and blend culture and nature in a creative way.

The Labyrinth Music Workshop is housed in a beautiful traditional building in the centre of Houdetsi.

Passing by the place at any time of the year, you will feel the aura of artistic creation permeating it. In the summer, you will see musicians about the big green yard, composing and interacting, spreading their melodies to the entire village. In the wintertime, you will hear sound escaping the workshop’s wooden floor, coming from seminars for lyra, bouzouki, sazi, violin, afghan rabab, arab oud, bendir, boulgari, tobak, guitar and a vast array of other modal* music instruments.

Labyrinth houses a permanent exhibition of traditional music instruments from all over the world. Part of the personal collection of Ross Dally, the exhibits are evidence of social, historical and cultural expression in their areas of origin. It is the only museum of its kind in Greece and contains a rich selection that sheds light on the most representative types of folk music from antiquity to now. There is also an instrument workshop where you can create or repair music instruments.

Labyrinth is perhaps more a musical way of life than merely a group of musicians. It started on Crete in 1982 simply as a group of friends dedicated to the exploration of the various modal musical traditions from around the world and the possibilities for creative interaction within and between them.

At various times, Labyrinth has included musicians from a very wide range of different ethnic backgrounds, each of whom brings to it the world from which he has come, through the medium of his own personal creativity. The members of Labyrinth do not necessarily share a common ideology or philosophy, rather they are united in a common spirit and, of course, love for music.

The term "modal music" usually refers to a specific music genre which is quite clearly defined by equally specific technical characteristics, and which is frequently identified geographically with the Middle East and the Orient.

True though this may be, for us it is something much more. Inherent in all of the great modal traditions of the world (both of the East and the West) is a primordial, transcendental spirituality, which is totally independent of religious dogmas or any other specific patterns of thought and feeling of a descriptive or prescriptive nature. It is this aspect of modal music which irresistibly draws us towards it, and which enables us to surrender to a transpersonal and transtemporal world which it opens for each and every one of us according to his or her individual nature.

The Houdetsi Festival is a celebration of music, produce and folk art, which has been organised annually in Houdetsi since 2011. The first two years (2010, 2011) it attracted more than 5,000 visitors. From 2012 and onwards, more than 15,000 people from all over the world attended the festival.