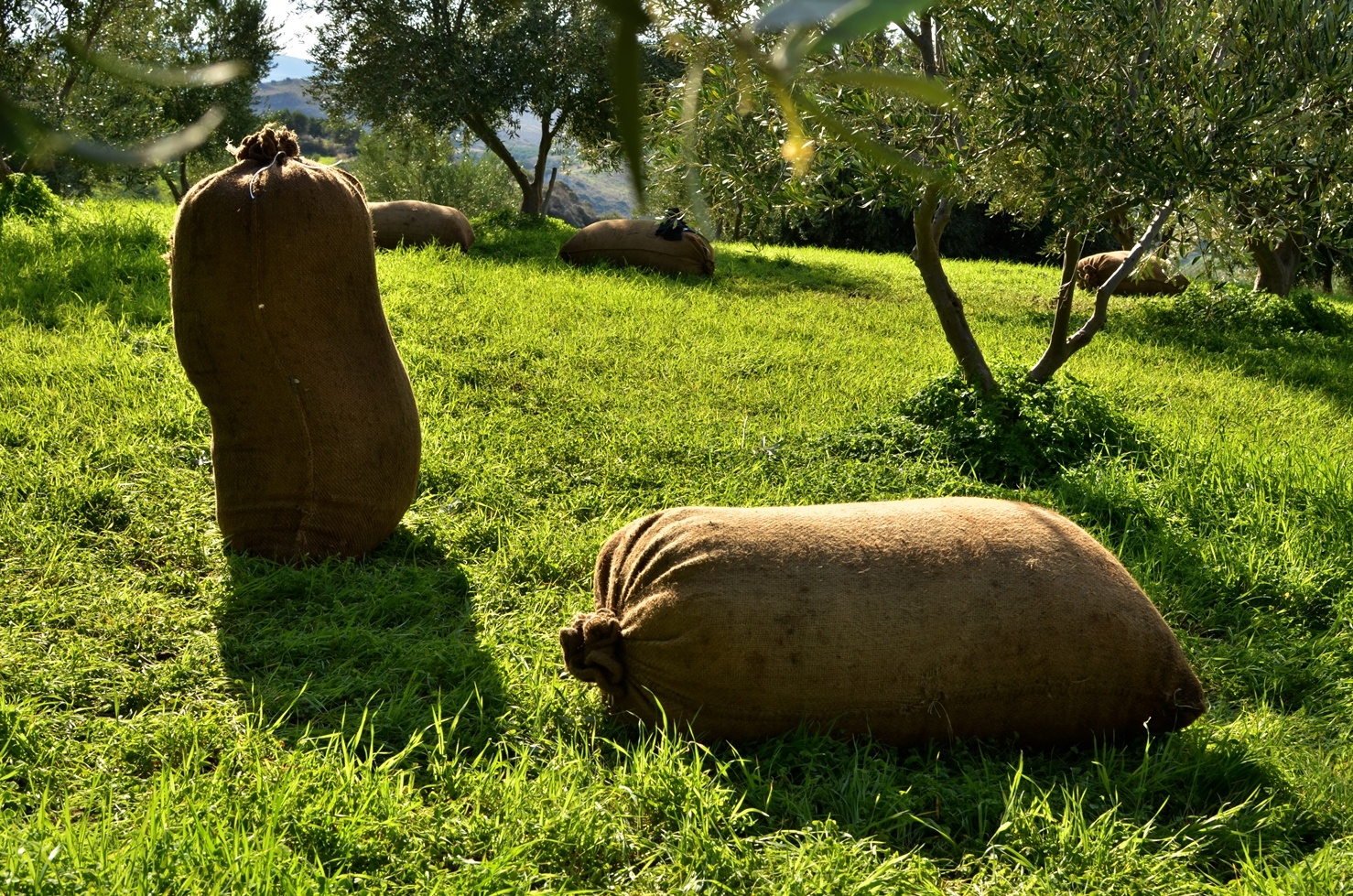 A drive through the area is sufficient for anyone to understand that the economy of the land is based on olive trees, vineyards and animal raising.

Grazing grounds cover 39.75% of the total area of the Municipality and arable land 57.16%. 1.09% is covered by forests (small clusters of various trees depending on the area) and 1.15% is used for residential purposes.

As expected, the greater part of the employed population (54.14%) works in the primary production sector. Especially in the south of the Municipality, in the area of the Asterousia Mountains, 70.19% of locals work in animal raising and farming (olive groves). Animal farming includes sheep, goats and to a much lesser extent poultry (mainly for consumption, not for sale). In the mountains animal farms very often make cheeses, mainly for family use (you will be very lucky if you find someone making cheese at a mitato (mountain stone hut) somewhere in the Asterousia and even luckier if you have the chance to try mature cheese, made with the artisan skill of the shepherd).

At present, most sell their milk to dairies.

Botanical and vegetable garden and the Seed Festival

Since 2011, with the initiative of the PELITI* farmers, action has been taken for the salvation, preservation and cultivation of local seeds, including cereals, in an effort to resist the control of seeds by multinational corporations and the replacement of local varieties by hybrids and industrialised mass-produced seeds.

In the garden, a 2 km2 field in Pyrgos, provided by the Municipality to local farmers, you can see alternative natural farming and sample the vegetables always splashing this beautiful garden with colours . Ask at the Town Hall, situated very close to the garden, and they will show you the field and put you in contact with the farmers, whom you can also contact directly (Stella: 6974-958711 local PELITI group).

If you find yourself here in the spring find out when the annual Seed Festival is held, during which there are seed exchanges and thousands of local seeds and vegetable and cereal varieties are handed out to farmers and other interested parties who arrive here from the whole Crete to listen, ask and talk about natural cultivation, agricultural development and ‘un-development’ issues.

Legumes, dwarf garlic and other vegetables…

This practice, in combination with the Greek economic crisis over the last few years, which has contributed to a gradual turn, even among young people, to cultivating the land and returning to the countryside, many new farmers have appeared throughout Crete and, naturally, in the Municipality of Archanes-Asterousia. These young “land lovers” have adopted self-organising and self-management practices, they plough the fields, plant seeds of every kind of vegetable, legume and cereal, and produce the tastiest fruits of nature, reviving memories and flavours that had almost vanished.

In the region of Silamos, very close to Pano Archanes, they are once again producing Cretan dry dwarf garlic with an impressively strong aroma and rich flavour.

The olive groves provide fruit thanks to the natural fertilisation of the land with nitrogen, which occurs due to the simultaneous cultivation of local lentils, chickpeas, and other legumes under the olive trees.

The activities of the ‘Galathinos’ company are noteworthy. A group of active animal farmers trade milk and meat with dynamic prospects for the standardisation of animal farming products.

In the middle zone of the Municipality, the N. Kazantzakis region, most locals work in olive groves and vineyards and raise animals.

In the Mesara region you will encounter cereals cultivated by very few families, mainly for private use. In older times, cultivating cereals was very common practice. At present, a renovated old flourmill grinds local cereal grains.

No small percentage of locals works in the tertiary sector, in retail shops, tourism and other services. Tourism, in particular, due to the Municipal cultural and natural wealth, seems to be playing an increasingly complementary role as regards other productive activities. Efforts have been made over the last 30 years for the development of agrotourism and many locals have invested in this alternative form of tourism, mainly in the Archanes and N. Kazantzakis districts, by transforming their homes into guesthouses, cafés, taverns and forms of services for tourists seeking more authentic versions of the tourism product.

PELITI is an urban non-profit organisation aiming at collecting, preserving and spreading local varieties. It undertakes activities of seed exchange and distribution, free of charge, to amateur and professional farmers, on the condition that they will cultivate them and pass the seeds on.

Almost all families have their own olive trees and oil production for consumption and sale to the oil mills is the rule for most households (something that happens throughout Crete, mainly in rural areas).

The same is true for the Archanes region. Apart from olive groves, the entire middle and northern side of the Municipality is covered by vineyards. The mild winter combined with the hot and dry summer, and the large amount of sunlight and coolness from the northern winds of the Cretan Sea, create ideal conditions for the vegetation cycle of vines, providing wines of exceptional quality and unique taste. Cretan vineyards are the most traditional in Europe, with old varieties, the roots of which are lost in antiquity and the Minoan civilization.

In this zone of the Municipality, apart from the cultivation of olive trees and vines, locals also work in plants processing and standardizing agricultural products. Almost all of these plants concern olive presses and wineries, including some co-ops which are very important for the agricultural economy of Crete, such as the Agricultural Cooperative of Archanes (with a modern packaging plant for table grapes intended for export to western Europe), and the Union of Agricultural Cooperative of Peza, of a panhellenic range and noteworthy and dynamic interventions, mainly in standardisation and trade of agricultural products.

70% of the wineries on Crete operate in the N. Kazantzakis territory.

In an effort to strengthen the productive web, support growth and promote the tourism and cultural product of the region, the Municipality has set up the institution of the Sunday Market. Local producers gather at each Municipal Community to offer visitors local delicacies, accompanied by cultural and musical events, combining a visit to the Municipality’s sights with the right conditions for a Sunday excursion.

In Archanes (Archanon Geuseis [Flavours of Archanes]), in Charakas (Melistalakti [Honey-dripping]) and in Agios Vasileios (Vasileion Glykasmos [Sweetening of Vasileios]) there are three exceptional women’s cooperatives that prepare hundreds of delicacies typical of Cretan cuisine. These are mainly baked goods (biscuits, breads, pies, kaltsounia (savoury pastries with various fillings), breadsticks, rusks) and local preserves (quince, citron, orange, as well as walnut, rose and many other imaginative desserts, usually served with Greek coffee or after a good meal). At their workshops you can also find desserts and other products made with grapes, carobs, molasses or carob-syrup, as well as liqueurs scented with the essential oils of fruits or aromatic herbs. There are also bunches of well-dried aromatic plants, such as dittany, marjoram, sage, oregano, savory, and others.

If you find yourself in these villages, ask where you can find the cooperatives and try one of these delicacies coming from a long tradition and excellent artistry.