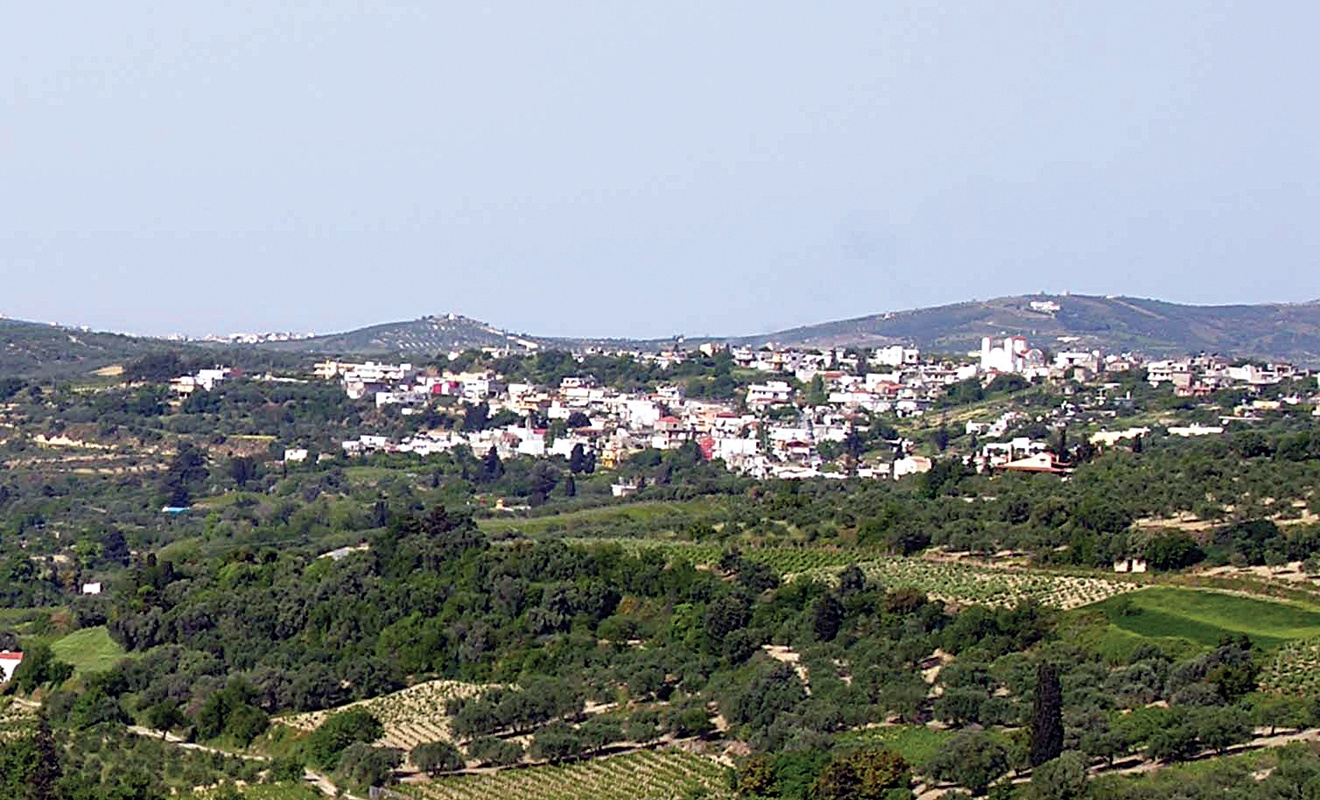 This is the ‘Wine Competition Village’; Agies Paraskies is built amphitheatrically on a hill, looking on to the Peza viticulture territory. The fertile land covered with vineyards and olive groves, provides it with renowned products such as olive oil and olives, table grapes, wine and raisins, and justifies the hamlet’s wine producing character (‘manganes’, i.e. olive presses of the Minoan era, have been found around the village).

Furthermore, its proximity to Heraklion and strategic location explain its continuous growth through time. The people that wanted to conquer the island left their marks on the area, creating rich popular tradition. Mythical treasures, the discovery of which promised the salvation of Crete, fairies and dark creatures star in the area’s myths. Construction of the hamlet began after the 11th century, while it has appeared in written references since the early 13th century. In 1630 Basilicata mentions two villages, Agies Paraschies Apano and Agies Paraschies Cato. That means that there were two separate hamlets, each with their own church of Agia Paraskevi (St. Paraskevi), thus justifying the plural name of Agies Paraskies (colloquial plural of Agia Paraskevi).

The name of the village comes from the 5 churches dedicated to St. Paraskevi, of which only ruins remain. Even the three-aisled church dedicated to the patron saint of the village, Agios Georgios (St. George), which can be seen at the rising of the village centre, is dedicated (one aisle) to St. Paraskevi (the other aisle is dedicated to the Agioi Deka – Ten Sainted Martyrs). You can find more chapels in the hamlet, such as Agios Antonios (St. Anthony), Prophitis Ilias (the Prophet Elijah) near the bridge of Kolomodi and other churches that lay in ruins. The church of Agia Zoni (Holy Belt) is especially important in the village, dating back to the beginning of the Venetian rule. It is full of murals, but, unfortunately, parts of them are covered with layers of plaster.

At Kambos location a domed-honeycomb shaped tomb was discovered, dating back to the late Geometric – Orientalising Period (810-600 B.C.). The tomb belongs to the same settlement complex as ancient Eltyna.

An important find from the region is the treasure made up of 82 hyperpyra (gold coins) of the co-reigning emperors Basil II and Constantine VIII (976-1025) as well as 8 similar coins of Nikephoros Phokas (963-969). The coins are kept at the Historical Museum of Crete.

North of the hamlet there is a location called ‘Pitsouni’ (Squab). This name is encountered in a bridal contract of 1462 and all evidence points to the fact that this must have been the first residential core of the village. Ruins of various tombs have been found, possibly from Archaic times, of the 5th or 4th century B.C., and the ruins of three churches. There used to be spring waters here and legend has it that fairies appeared there and whoever drank the water lost their mind.

To the east of the village, there is the small hamlet of ‘Kolomodis (kalo+modion: a unit of measurement), where there were inns for travellers in the Ottoman era.

At the Founaroi dependency, near Angarathos Monastery, lived Greeks who had been persecuted by the Ottomans before settling at Agies Paraskies.

The village’s contact with Angarathos Monastery had a positive impact on locals’ education. Indeed, the Metropolite of Crete, Meletios Nikoletakis, who was born in the village, while serving as the Father Superior of the Angarathos Monastery, in 1815, organised the Secret School at the Byzantine church of Agia Zoni (Holy Belt). The first school was built after the liberation from Ottoman occupation and it has been renovated and preserved to date housing the Municipal Fine Art Workshop.

A group of village residents participated in Theriso Revolt of 1905, in the context of the Cretan Revolution seeking to unite Crete with the rest of Greece.

During the Nazi occupation, Nazi forces set up base in the village and had ammunition stock kept around the area; they organised air defence forces around the village. Residents tried to fight conquerors in every manner possible. They organised resistance groups with the participation of soldiers who had returned from the Albanian front and other young men. Some of them had organised themselves in the surrounding mountains and were involved in the Resistance.

Painter Stephanos Nikolaidis (1814-1907) was born in the village; he is famous for his historical notes and icon painting. Icons painted by Stefanos Nikolaidis are found in the old church of Agios Minas, as well as at Agios Titos (St. Titus) and Agia Zoni (Holy Belt) in Agies Paraskies.

The local wine-making contest is an independent yet integral part of the ‘Wine Routes’, established in recent years as a participatory event; it revives the custom that wants all local wine producers opening their barrels and contesting; the judges are professional oenologists. This contest is held in November at Agies Paraskies and numerous producers participate with their wines, while crowds of guests from the entire island arrive to taste the wines and the local dishes prepared by the Cultural Association, village women and the Municipal authorities.

The view of oenologists-judges reflects the impact of the event: the quality of local winemaking has soared in recent years and part of the success is due to the contest. Furthermore, the event is not limited to a wine-tasting evening, but it includes speeches by eminent connoisseurs on vinification and viticulture (e.g. a two-day meeting dedicated to wine and vineyards) as well as parallel cultural events (concerts, theatrical performances, film and documentary screenings, fine art works, local product exhibitions, etc.).