Recommended season: Spring, summer, autumn (avoid high temperatures, because you will be constantly exposed to the sun)

Amenities: Tavern and café in Ethia. The Ethia Parish Guesthouse offers accommodation at low prices, following arrangement with the Parish (ask at the village). A camping site is available to the public at the Information Centre of Ethia (in the Ethia old school yard - Inquiries at the Town Hall). Cafés, grocery stores and taverns at Rotasi and Mesohorio

The trail can be easily discerned and starts at Rotasi village. It follows an uphill route and passes through geological formations such as ‘Tafkos tou Peristera’, an impressive doline that is 15-20m deep, created by the collapse of a cave roof. Continuing onwards, you will pass ‘Rouso Egremo’, a complex of limestone ridges that climax at the ‘Langadi stis Trypes’ location. There is also a spring there. Further along, the path intersects with the road, which you leave behind and continue towards Ethia, where the first part of the trail ends. At Ethia drop in at the visitor information centre, where you can find information on the Asterousia Mountain Range protected area, watch a documentary, pick up pamphlets, while you can also camp out if you wish to do so.

Those of you with the necessary stamina can continue onto Ethia gorge, also known as Chavga gorge or Vorno gorge. This is an old goat trail, suitable for mountain climbers or experienced hikers, as there are some rather hazardous stretches along the way and the path is not easily discernible. To get to the Vorno trail follow the road from the Information Centre, turn right into the alley immediately after the café and head straight on until you reach the Ethia-Achentria country road, which you cross and continue through the fields, heading to the gorge.

As the path is an old goat trail, it is easy to miss, so ask local farmers about locations and place names, such as ‘sto galano charaki’, ‘st’ Apatsanou to ryaki’ (water spring), ‘o Stavros’ plateau, ‘o Gero-trochalos’ (an outdoor stone-built dairy farm), ‘ sto Souvloto Mouri’, ‘stis Kato Porous’ with the picturesque chapel, ‘ston Apano Poro’ with its limestone ridges, ‘platoma tou Kastelou’, where you have to be careful as the trail starts getting dangerous due to the gravel covered slope, which becomes even more dangerous before the next water-eroded patch [nerofagoma]. ‘Spiliara’, a large rock shelter that can be made out from far away, marks the exit from the gorge.

The trail ends at the bed of the gorge, where you have to start heading west in order to reach Rotasi. Be careful of wire fences encountered throughout the route, the gates of which you must close behind you… it is an unwritten law of the mountains throughout Crete.

Download the kml file of the route in your device:  (kml) Rotasi - Ethia - Rotasi 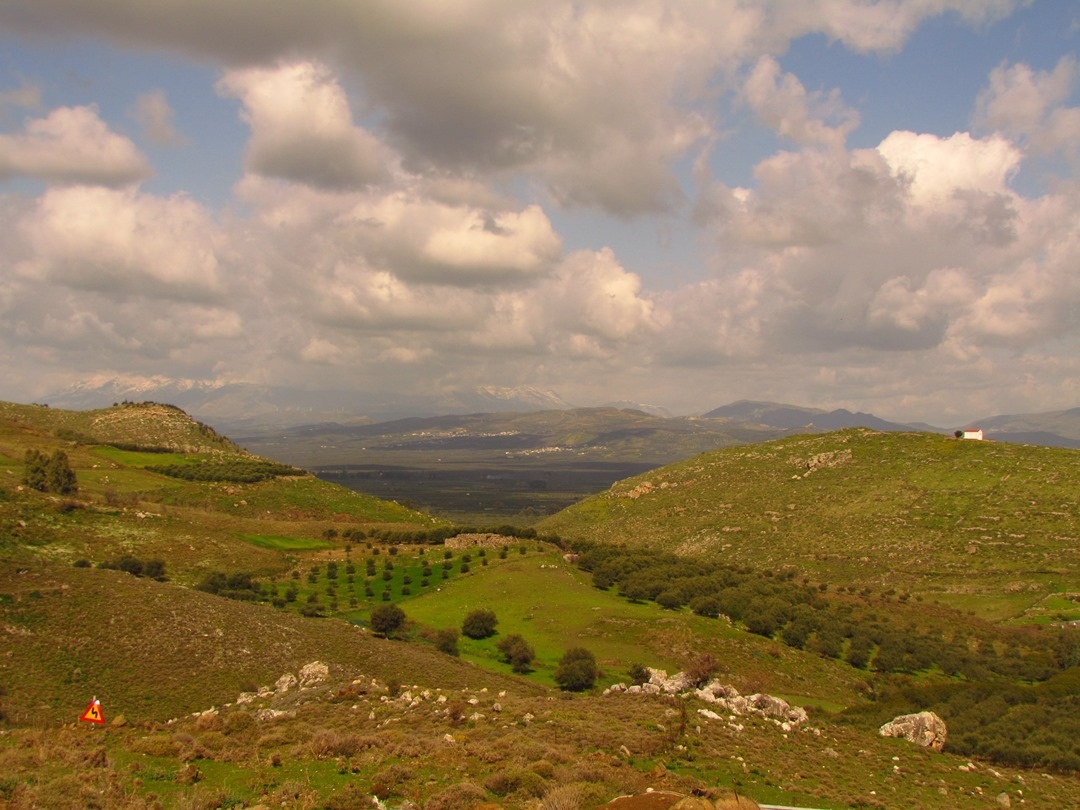 Rotasi (ancient Rhytion) is located on the northern slopes of the Asterousia Mountain Range, at the foot of the Asfentylia rising. It was one of the ancient cities of Central Crete in the Archaic – Hellenistic Period and one of the cities mentioned by Homer in the Iliad, as having participated in the Trojan War. In Rotasani Kefala there are now the ruins of the ancient city of Rhytion. Ancient tombs of various types dating from the Geometric art period (10th-8th centuries B.C.) to the Roman era have been found around the hill and lower in the valley.

The Geometric domed tomb excavated by N. Platon was a great discovery, as it had received more than 40 burials, and yielded an large number of vessels, as well as a sarcophagus and many iron weapons, pins, brooches, silver hairpins and one gold hairpin, and golden rings and foils of gold used to decorate the clothes of the dead. Part of the finds is exhibited at the Archaeological Museum of Heraklion. There are also noteworthy finds from Minoan times, such as the bronze tool and weapon hoard, found at Asprolivada location, in an area where a Minoan hamlet was discovered, as well as a number of impressive stone vessels made from serpentine at Livadeitis location. Part of a Roman settlement has been escavated at the ‘Kserokampos’ location. A Geometric cemetery has been discovered at ‘Ampasos’ and ‘Farmakara’,

A lovely trail starts from the village, which has always connected it with the hamlet of Ethia. Signs and information can be found at the starting point of the trail. 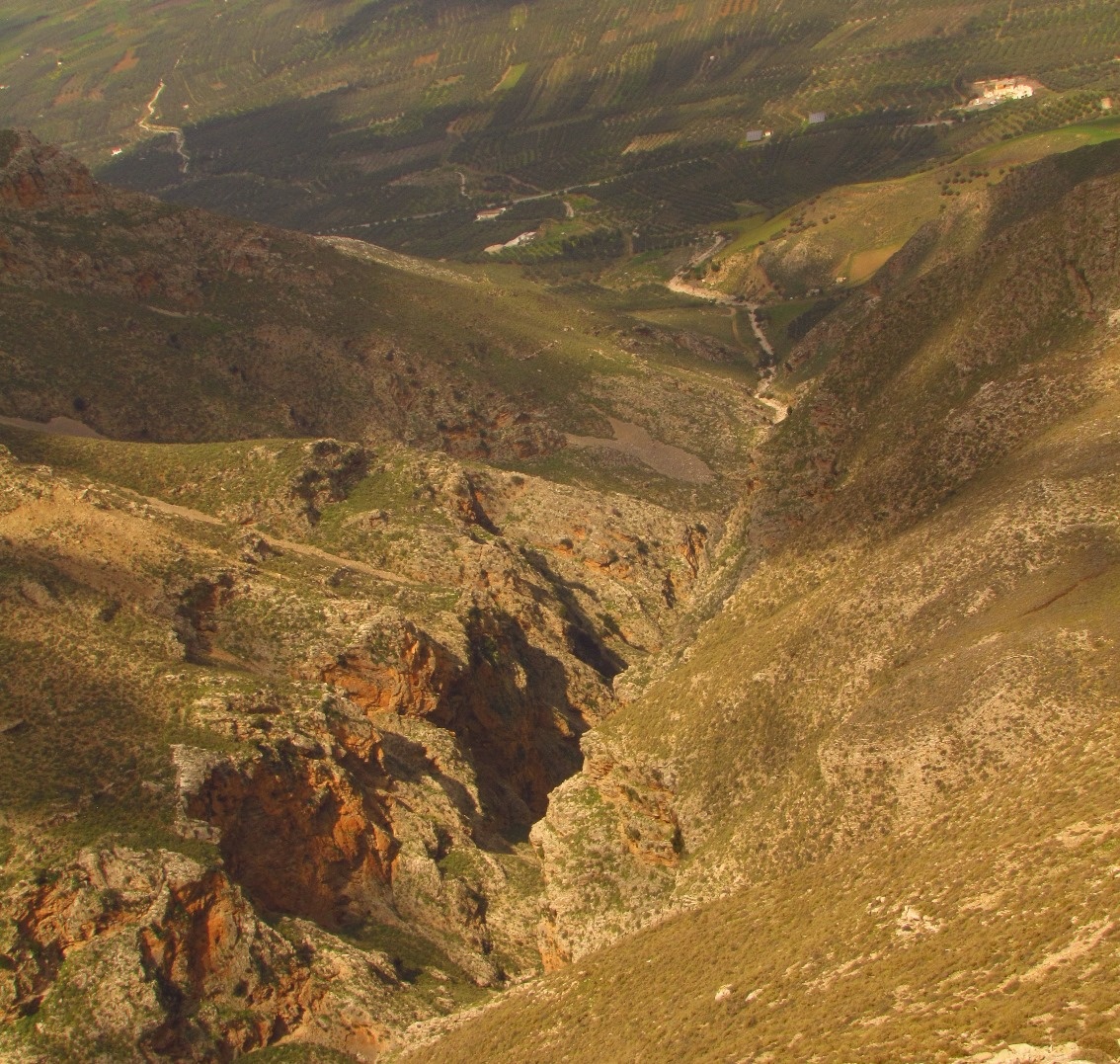 After stopping at the Ethia Visitors’ Information Centre where you will learn about the Protected Area of Asterousia, continue towards the Vorno (or Ethia, or Chavga) Gorge, the largest gorge on the northern side of Asterousia. The typical limestone rocks, some of which are crumbling, are clearly visible above, so you need to be very careful of landslides. From the entrance to the gorge the rising of Asfentilia is visible, where scientists from the Natural History Museum of Crete have located rare fossils, which will be studied to contribute significant new data on the paleontological history of the island. Water only crosses this gorge after heavy storms. It is generally open and features a long hiking path at its exit, meeting the Anapodaris River, which waters the large valley of Mesara. The gorge can be also crossed on foot. 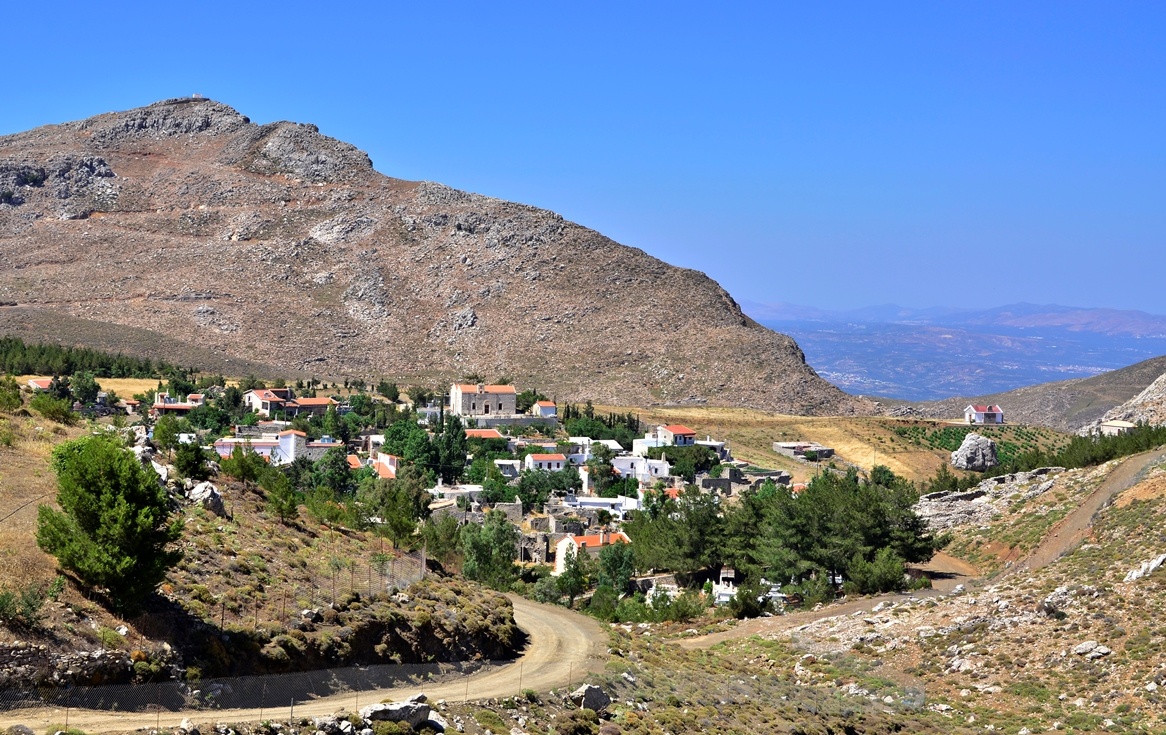 Ethia has been listed a traditional hamlet. It is a typical example of a mountain village of Crete, on the Asterousia Mountain Range at an altitude of 740m, surrounded by five mountain peaks. It is a very impressive land and very well-preserved, thanks to the efforts of the locals, who have been working tirelessly for years on the restoration of its buildings, laying down cobbles in the narrow streets, and, mainly, keeping their village alive, despite the difficulties due to its distant location.

The name Ethia (Itea – Itia, meaning “willow”) originates from a plant, as do the names of other villages in the area (Amygdalos, Mournia). Legend speaks of a large tree with enormous branches that provided shade for the locals and passers by – and feasts and celebrations were held under its leafy branches. There are no traces of this legendary tree any more, but, if you start up the road that climbs the bare stone mountain over Rotasi, your eyes will immediately be drawn to the young green pine trees, that suddenly alter the landscape as soon as you reach the village entrance. It is a bocage planted by the locals, which has become an oasis of green on the treeless ridge of the Asterousia.

The locals are mainly farmers raising animals and toiling the land. The main products include goat and sheep produce (meat, milk and dairy goods), olive oil and raisins, as well as plants used to feed animals.

Ethia is also known for its Ethianos Pidihtos Choros (local lively dance), an interesting variation on a Cretan pidihtos (jumping dance), that is danced nowhere else on Crete.

A documentary on Ethia has been filmed by Vasilis Panagiotakopoulos, titled ‘The Little Palace of Aoria’.

The village churches are Panagia (Virgin Mary) built in 1909 and Profitis Ilias (Prophet Elijah). Profitis Ilias with its age-old wooden iconostasis, is built on a rising with a panoramic view. According to one tradition, it was built in 1874 in just one day, as the ruling Ottoman Pasha had only allowed from sunrise to sunset for it to be built. A great festival is held here every year for Prophet Elijah’s feast.

In 2007 to honour Mt. Athos monk Evmenios, who was from Ethia, a guesthouse was built in the centre of the village, where travellers are welcomed and many events are held.

Until recently (1965) a quite interesting traditional ritual was kept in Ethia, ‘zosimo tou choriou’ [the binding/circling of the village]. In order to drive back some evil that threatened the village, each woman would take some cotton to the church for the priest to bless. From there, women began to spin it into thread and wrapping it around the village. The thread was left surrounding the village for forty days and then it was collected and used to make candles.

If travelling on a 4x4 vehicle, don’t miss the opportunity to take the trip south of Ethia, crossing impressive spots in terms of terrain and scenery along a number of dirt roads. Typical points of reference on this route are Kouroupas pit, a deep pit created by water, which clearly shows how gorges are geologically formed, ‘pervola’, with the beautiful limestone ridge and colourful garden right below it, Agia Eirini chapel and the ‘potistres’, a series of stone-carved watering troughs for cattle.

One of the oldest handicraft applications on Crete is basket weaving, which has recently declined. Using flexible branches from bushes or reeds, the locals once created many of the everyday objects used in the agricultural and herding lifestyle.

Today, basket weaving still flourishes in the villages of Ethia and Rotasi. You can find samples of this art on the village squares.

A recently published book, “Ethia: Pos na se ksechaso” [Ethia: How can I forget you?] (Itanos publications), discusses the habits, customs, traditions and lifestyle of the residents of Ethia and the Asterousia in great, colourful detail.

Information Centre for the Protected Area of the Asterousia and Ethia Camping Centre.

Arriving in the village from Rotasi, you’ll meet the old – now defunct – elementary school, restored by locals themselves (Ethia Regeneration Society). Ask the villagers at the cafés to unlock the school so you can travel in time through old photographic material, traditional Cretan attire and other heirlooms gathered by residents and exhibited in this building, which villagers treat as their home.

In 2011, the Municipality of Archanes-Asterousia attempted to revive the memories and the village itself by organising events such as children’s camping and, now, an information centre for the protected area. Set to start operating in 2015, it is located in the schoolyard and will provide information on the surrounding mountains, their biodiversity and activities available in the entire Municipality. Furthermore, inside the school, visitors will be able to watch documentaries and films on the Municipality and the protected area. You will also be able to borrow special equipment for activities such as bird watching, cycling, etc.

Apart from the information centre, the yard also houses a fully equipped, contemporary camping site where you can put up tents of your own or borrow some from the centre. The camping area includes tent shades, toilets, outdoor showers, water taps, a small kitchen, tables and benches.