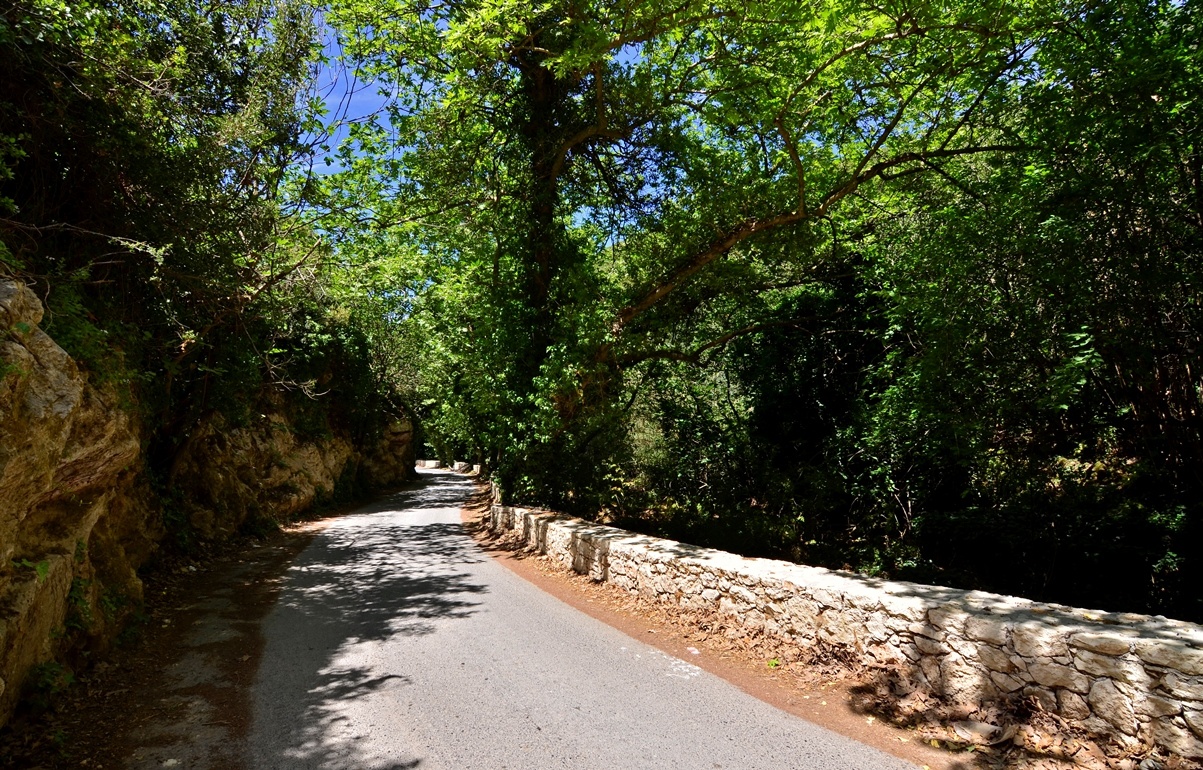 This is one of the most interesting trails in the Archanes area. It starts at Epano Archanes and follows the asphalt road that runs parallel to Knosano Gorge; shortly after the chapel of Ai Giannis Myristis [St. John of the Myrrh] and the biological treatment plant you will come to a downhill dirt road going right and leading you to the bed of the small gorge. Cross the small bridge and follow the trail to Karydaki Bridge, the Venetian aqueduct bridge that used to bring water from the springs of Archanes to Heraklion.

Leave the bridge on your left and follow the easily discernable path that makes its way uphill, comes to a wooden pavilion–observation point, and ends at a dirt track leading south, taking you slightly uphill until Kefala Forest. Follow the dirt road south to Fourni, and after passing the archaeological site with the prehistoric cemetery, you will be back in Epano Archanes.

Download the kml file of the route in your device:  (kml) Knosano gorge 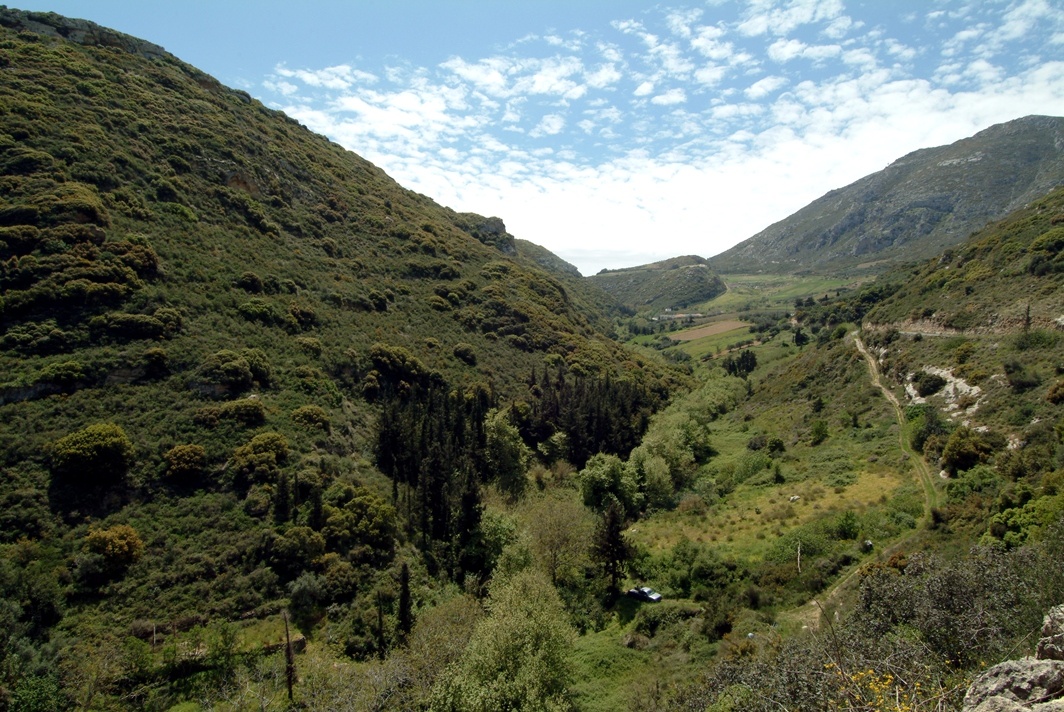 Knosano Gorge extends south of Archanes (Agios Mamas), goes through the hamlet of Archanes at Kato Mylos Location, Myristis Location and the aqueduct at Karydaki, up to the aqueduct of Agia Eirini Spilia; the total length of the gorge is around 5.7km; it goes on to the north, through Knossos. The Kairatos or Katsambas stream runs through it, which leads through Agia Eirini and Knossos and flows into the sea at Katsambas location. The gorge area, which is called ‘Paradeisos’ (Paradise), has been listed as a ‘Landscape of Exceptional Natural Beauty’ and is included in the Natura 2000 Network.

The Flora of the Gorge

Floral biodiversity in the gorge is limited, due to the shade cast by the prevailing species, i.e. plane trees and blackberry bushes. In total 120 species have been recorded so far in the gorge, of which 40 are encountered in river beds and the rest on the embankments. Endemic species only grow on the embankments, and there are 11 species, 2 of which are rare and 9 common endemic ones to Crete.

The rare ones are: ‘kampanula’, Campanula tubulosa, in West Crete and ‘nepeta’, Nepeta melissifolia, which is endemic to Crete and the island of Melos, is found in small populations. An important feature of the gorge flora is the presence of a significant population of an arctic type of Elm, namely Ulmus minor ssp. Canescens.

There are a few individuals of this species in the area of Chania, where it is considered an foreign species. The fact that there is a significant population in Knosano Gorge indicates that it is indigenous to Crete, a relic of a past cold period, when there were still glaciers in continental Europe.

The Fauna of the Gorge

Two migratory bird species are found in the gorge, namely the spotted flycatcher (Muscicapa Striata) and the hoopoe (Upupa epops epops). There are also jackdaws (Corvus monedula) and some rock-living birds, such as the blue-rock thrush (Monticola solitarius), while the rest of the species are typical for bushy vegetation.

Where there are fresh-water wetlands and riparian trees, there is a wide variety of passerines, such as finches and the great tit. The gorge is also habitat of the Balkan pond turtle (Mauremys rivulata) and the apmphibians green toad (Bufo viridis) and tree frog (Hyla arborea).

Aqueduct and water bridge in Karidaki 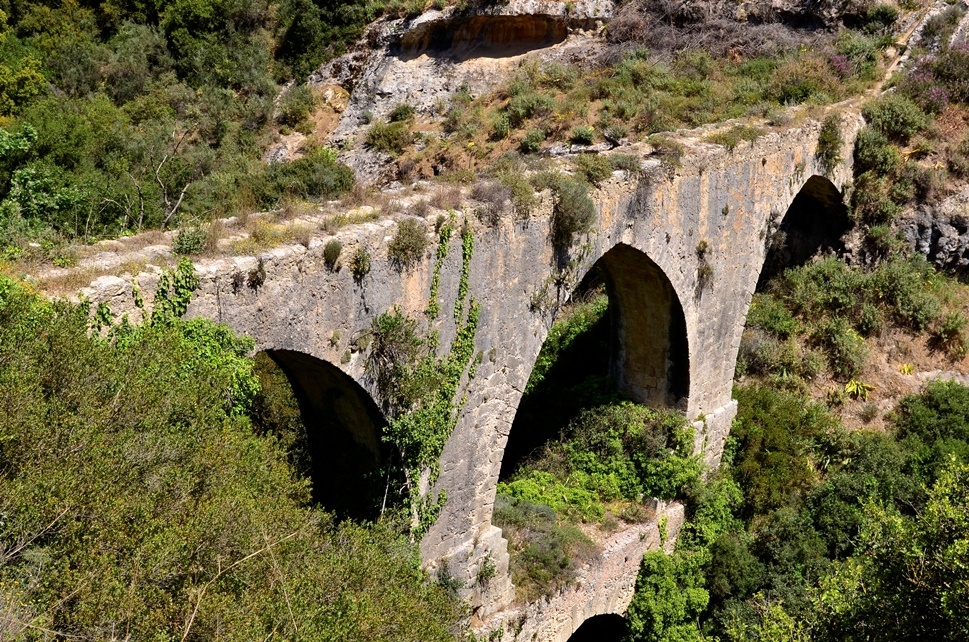 Heraklion had always had a water shortage problem and that’s why, in 1627, the Venetian Francesco Morosini decided on a public project that would resolve the issue once and for all. He had an aqueduct constructed, where the waters from three springs, of Archanes: Pelekita, Agiou Georgiou and Karydaki, were collected (during the Ottoman occupation period, waters from more springs were channelled into the aqueduct). The stone pipe was 15km long and led the water, through Syllamos and Fortetsa, to the central square of Chandax (present-day Heraklion), to the Four Lions Fountain. At Karydaki location in Archanes Gorge, there is an aqueduct standing in good condition; it is around 65m long, with one large arch and two smaller ones. On the bridge there is a sign in Latin, indicating the year 1627. The aqueduct of Morosini was inaugurated in 1628, on the day of St. Mark’s feast, the patron saint of Venice, at the Lions Square.

In fact, Morosini had a commemorative medallion cut: on one side there was Zeus and on the other an eagle, pouring water from Mt. Juktas. Around the perimeter of the medallion there was the inscription “Quadet feumine non fulmine”, which means “Happy with the water not the thunder”.

In order to ensure its safe operation, the Venetian ruler ordered that anyone who damaged the aqueduct should be severely punished (imprisonment, forced labour, exile, confiscation of property); furthermore, it was forbidden to plant trees within a radius of 10 steps on either side of the pipe. He also ordered that Panagia Kardiotissa Convent should be vacated, because he was afraid of sabotage.

Morosini’s aqueduct is probably one of the best and most beautiful water supply projects from the era of Venetian rule and relieved residents of Venetian Chandax from long water shortage periods. The aqueduct is around 15km long, starting from the northern foot of Mt. Juktas and ending at the eight-lobe fountain of Morosini, popularly known as ‘the Lions’ (in the city of Heraklion, Venetian Chandax). The aqueduct was standing almost in its entirety, along with later modifications and additions, until the Second World War. Heraklion received its water supply from Morosini’s aquaduct until 1927!

If you are coming from Heraklion, continue on the way to Syllamos and then towards Karydaki and Archanes. After you come to the riverbed at Syllamos, the road goes uphill to Karydaki district (there is no village); in a chasm with steep banks, on the right, there is the second part of the Venetian aqueduct.

The impressive bridge is not visible from the road, but you can see it on the left, from the side of the road. There is a footpath going downhill, backtracking for about 50m, after the road bend (at the next bend there is a small stretch 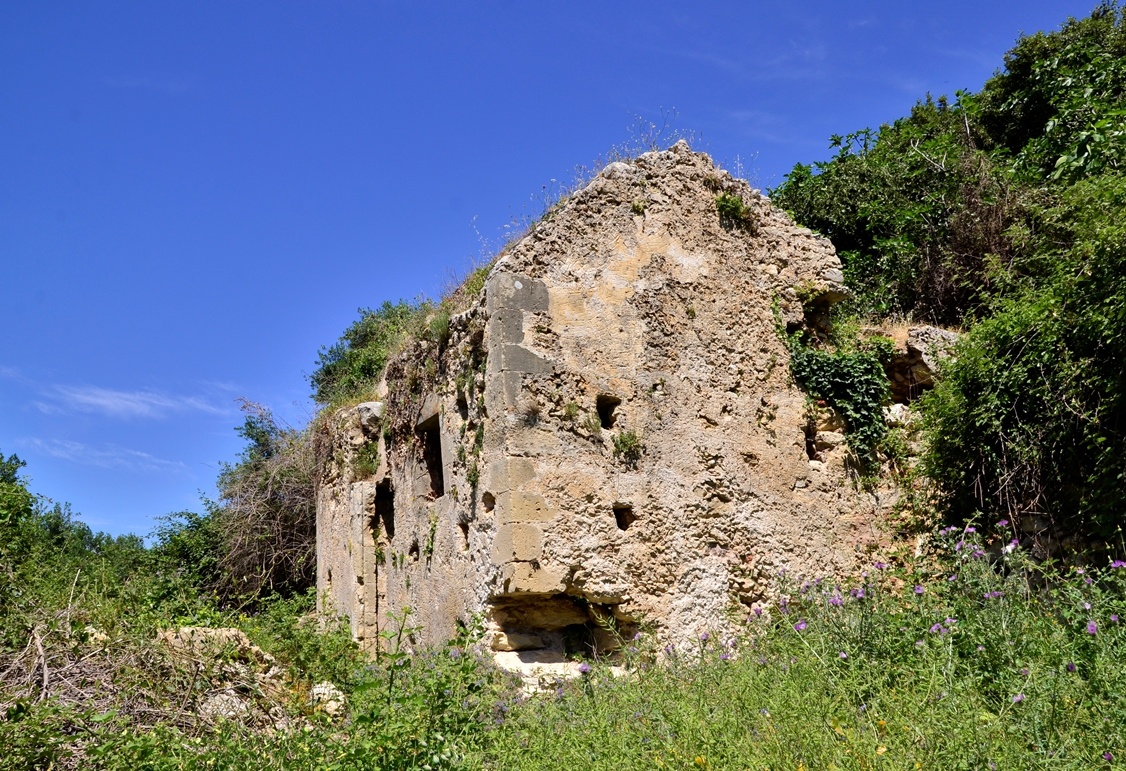 The church of Panagia Kardiotissa (Our Lady of Karydaki) is situated 3km from Pano Archanes (Upper Archanes), on the slopes of the River Kairatos valley flowing towards Heraklion.

It was probably built before 1200 A.D. As the church of Our Lady of Karydaki is referred to as ‘old’ in ledgers, 1000 A.D. seems to be an acceptable estimate of the year it was constructed in. When visiting in 1415 A.D. (records refer to ‘Panagia Convent in Karydaki’), Italian monk Cristoforo Buondelmonti found a thriving convent.

In 1908, Italian historian Giuseppe Gerola presented a floor plan drawing of the church at ‘Karydaki’, with the description: “An unnamed church in the district known as Karydaki, in Temenos, close to the aqueduct. It has three aisles, but only two of them are in front of the narthex”.

The church is a three-aisled basilica with a floor area of 60m2. There is a domed narthex, in front of the middle and southern aisles, similar in both layout and masonry style to Paliani Convent in Venerato and to the churches of Panagia Kritharida (Our Lady of Kritharida) and of Agiou Ioanni (Saint John) in Liliano in the Pediada region. The convent fell out of use as a result of restrictions imposed as part of a plan executed by the brilliant Fransesco Morosini to supply water to Heraklion. The Venetian indeed succeeded in supplying Candia (as Heraklion was then known) with water from Mt. Juktas.

The springs from which Morosini’s water project supplied the city of Heraklion as early as 1627 can be found in the same gorge the river flows through.

The area’s geophysical particularities necessitated the construction of aqueducts at Syllamos, Fortetsa, and Treis Kamares (Three Arches), as well as a number of other engineering works.

The water was conveyed over the purpose-built aqueduct and into the main conduit where it continued its course, through the aqueducts of Syllamos and then Fortetsa until it finally reached Candia.

Today, the church of Panagia Kardiotissa lies in ruins, close to the renowned Karydaki Aqueduct.

On Fourni Hill, between Pano and Kato Archanes, near the Minoan settlement of Archanes, within an olive grove and vineyards, a rich cemetery was discovered; this is one of the most important archaeological sites on Crete. Fourni Hill is the border of the small plain of Archanes to the north-west, but it is not part of Mt. Juktas; the western slope of the hill is steep and its peak barren.

Tombs were in use for a very long time (2400-1200 B.C.) and a wealth of artefacts have been unearthed, making it one of the most significant cemeteries in the Aegean territory. The oldest burials date back to the 3rd millennium B.C., while some tombs were used for an extremely long period (2000 B.C -1350 B.C.). Of the constructs revealed to date, most are funereal, but there some were for secular or worshipping purposes.

Fourni necropolis is characterised by a multitude and variety of burial constructs, built in a wide range of architectural styles; among them are those of eminent royal persons judging from the wealth of votive offerings. Furthermore, important evidence concerning the funereal customs and worship of Minoans has been collected. Light has been shed on the manner in which a major cemetery in the Mid and Late Minoan periods was organised and managed, with the construction of auxiliary buildings, paved roads and systems to drain rainwater. Many of the votive offerings and artefacts are imported and reflect the contact between the residents of Archanes and the Cyclades, Egypt and the East. Access to the necropolis was from the south; there is a wide path, still paved at some points, which leads from Kato Archanes to Fourni. There is a similarly constructed ascending path within the cemetery as well. It is possible that the path was constructed in Minoan times, to help the residents of Archanes carry their dead, the sarcophagi and various other objects. Until 1964 Fourni necropolis was not known. It was in that year that the first exploratory excavation by G. Sakellarakis, revealed a vaulted tomb at the east foot of the hill. The following year some more vaulted tombs were also located and since then there have been incessant excavation works exploring the area. Works to support all funereal constructs have also been carried out.