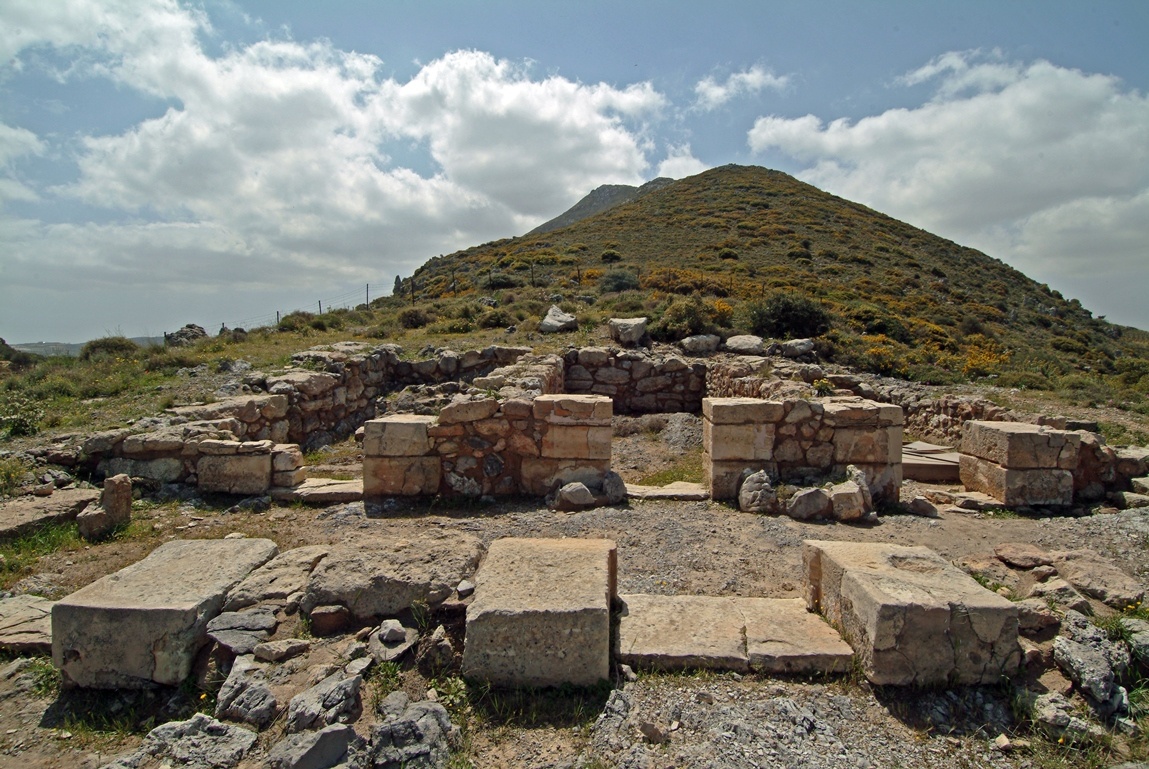 The Anemospilia was an important landmark in the history of Archanes. There, on the north slope of Mt. Juktas, with views towards Dikti, Ida, and every other major or minor centre on the north coast, was where Yannis and Efi Sakellarakis, in 1979, found a unique –to date– temple from the Minoan Period. The Anemospilia building stood for only half a century. It was unexpectedly ruined by an earthquake in the mid-17th century BC. Entry to the enclosed archaeological area is not permitted without prior arrangement with the competent archaeological service (Tel.: 2810 752712).

On the site, archaeologists have excavated a four-room building, which might have featured additional auxiliary spaces. It is a solid structure, with thick walls covered in partially preserved white or red masonry. Cut tuff stone was used for the thresholds and frames.

The rectangular building comprises three closed rooms of equal size along the south and a long corridor in the north that covers the length of all three rooms. The building is surrounded by an enclosure, believed to have been a temple, the statue of the deity residing in the main chamber.

This type of building is known from works of art depicting tripartite temples, such as the gold flattened strips from Mycenae and Volos, the stone rhyton (liquid containing) vase from Zakros and the Archanes ring. These representations depict freestanding temples on mountain slopes, the types of which were later transferred to residential complexes, such as those of Vathypetro and Knossos palace.

According to researchers, the antechamber was where the preparations for acts or worship were made. The discovery of 150 vessels of various shapes, including an important chalice, as well as jars, pestles and pots has provided further evidence. The jars, some of which are carved with writing, were used at temples to store fabric but also the necessary liquid and solid foods for rituals. Both pestles and pots were used during preparations. The antechamber’s benches did not only function as seating but were also used to store vessels. In front of the double wooden door at the entrance to the central chamber stands a stone structure, possibly used for libations or cleansing rituals.

The central chamber was packed with the largest vessels in the temple. Besides the jars stored along the walls, the entire room was full of vessels with the exception of the north and northwest parts. This chamber was where an important discovery was made: a pair of unnaturally large ceramic feet with a finished hole on their upper surface. Around the feet a thick layer of wood ash was found, which hints at the object being a remnant of a large wooden acrolithic statue – a statue whose extremities were made of different material than its main body. This acrolithic technique was known in the Aegean since the Neolithic Period and on Crete since the Middle Minoan Period. According to the archaeologists, the statue would have been placed in the central chamber of the Archanes temple, next to the non-sculpted rock intentionally placed in the same room, representing ‘the sacred earth’. The vessels found all around are indicative of the offerings to the deity of worship following both bloody and bloodless rituals performed in separate areas. Charred nuts have been found in a vessel, typical of such practices. Perhaps the last offerings were made on the non-sculpted rock.

According to the evidence, bloodless rituals were carried out in the spacious eastern room, featuring a graded structure sculpted on the rock that probably served as an altar. Baskets, prochous (beaked) vases of various shapes and three calyx-shaped cups are some of the objects found in this room. The cause of the building’s destruction, a powerful earthquake that took place in the first half of the 17th century BC, offers a possible explanation for the findings in the western chamber of the temple.

Here, the skeletal remains of two humans were found, whose cause of death is related to the falling stones and wood panels from the room and the resulting fire. Moreover, the skeletal remains of a third person were found on a table like structure shaped like a pedestal rising from the plastered floor. This person’s death was from a wound inflicted using a sharp-edged weapon. This, according to archaeologists, was the result of human sacrifice – a rare but actual practice in Minoan Crete. Finally, a third body has been discovered, crushed while the person was trying to leave the building.