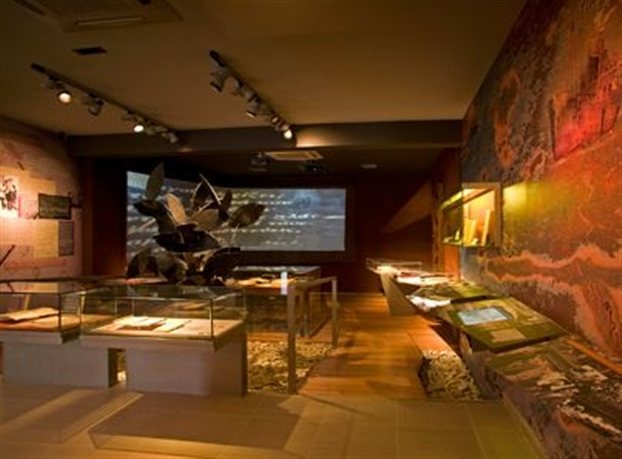 “My Father’s Clan”, writes Nikos Kazantzakis in ‘Report to Greco’, “draws from a village they call Varvaroi [lit. Barbarians]”. In this village, present-day Myrtia, 15km from Heraklion, where the wine routes meet the author’s words and the serene Cretan landscape, Nikos Kazantzakis’ Museum has been operating since 1983. It was one of the first personal museums of a literary personality in Greece.

The visionary and founder was set designer Yorgos Anemoyiannis; his efforts secured the premises and the creation of the collections started with the help of Eleni Kazantzaki and numerous private individuals.

Visitors have the opportunity to get to know the personality of the author through his manuscripts and notes, specimens of his correspondence with great thinkers, politicians and literary figures of his time, first editions of his works in Greek and other languages, rare photographs, mementos from his travels, personal items, scale models, costumes and material from performances of the author’s dramatic works – in Greece and abroad – portraits and sculpted works representing his likeness, dozens of his translated works, bringing his memory back to life and shedding light on Kazantzakis’ work and personality.

The Museum keeps enriching its collections, preserves and uses all kinds of “kazantzakian” material. It also organises actions, such as the scientific documentation and digitisation of the author’s archives, the creation and implementation of educational programmes, and the production of printed and digital publications, while it always tries to improve its services. The next goal for the Museum is to reinforce and encourage scientific research on Kazantzakis’ work and to promote its cognitive and educational role through appropriate actions.

Within the museum there is a café-reading room, providing excellent quality meals and snacks, as well as a shop selling N.Kazantzakis’ works translated into many languages, as well as a range of other books.

The great author Nikos Kazantzakis was born in 1883 and was raised in Heraklion. His childhood in his birthplace was filled with indelible experiences, which seem to have played a decisive role in the way the young man developed. At the tender age of 7 years he experienced the Revolution of 1889 and at 17 he saw his homeland liberated from the Ottoman yoke. He greedily breathed in the reviving air of such heroic moments for Crete and this had a great impact on him, as reflected by numerous relevant references in his works.

In 1908, having completed his legal studies at the age of 25, Kazantzakis took his first steps on the Modern Greek literary scene with his works ‘The Sickness of the Century’, ‘Serpent and Lilly’ and the play ‘It’s Dawn’. These early works heralded the significant literary course he was to follow in later years.

Kazantzakis was influenced by Friedrich Nietzsche, whose work ‘Thus Spoke Zarathustra’ he translated; he also fought in the Balkan Wars in 1912-13. In the interwar period he travelled incessantly and wrote his most important travelling works, while he translated the Odyssey into Modern Greek. After World War II, Kazantzakis authored his most important works, such as ‘Christ Recrucified’, ‘Captain Michalis’, ‘The Last Temptation’, ‘Zorba the Greek’ and completed his own ‘Odysey’, which he spelt with one ‘s’ to distinguish it from Homer’s, telling the story of Odysseus after he returned to Ithaca.

His work ‘Report to Greco’ records in an autobiographical manner his world theory and basic views on life and intellectual creation. In almost all his works Kazantzakis reflects his love and admiration for Crete and its people, talking about the ‘Cretan View, the manner in which Cretans experience life and express themselves through daily activities and spiritual quests.

Kazantzakis lived the final years of his life in Nice, France and died in Freiburg in 1957. He was buried in his beloved Cretan land. From his grave, at the Martinego Bastion on the Venetian Walls of Heraklion, he looks out onto eternity.