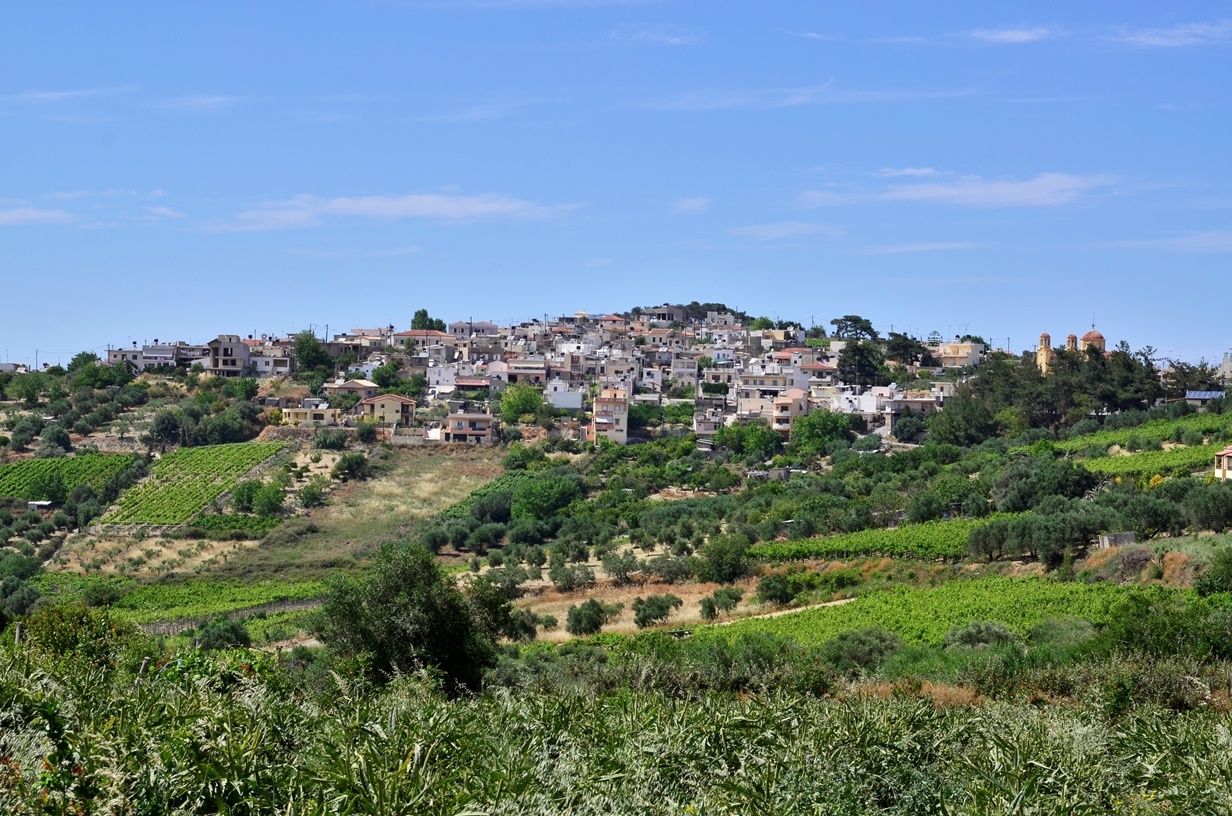 Myrtia is the home village of the world renowned intellectual Nikos Kazantzakis, who may be the most translated author in the world. The village used to be called Varvaroi.

According to tradition the name came about when Byzantine Emperor Nikephoros Phokas liberated Crete from the Saracen pirates in 961 A.D. and some of his troops settled in the village. They were barbarians (varvaroi), not Greek. Others say that the village was the base of barbarian pirates who robbed passing travellers and they named the area Varvaroi. According to Venetian information, however, the village owes its name to its first resident, who was Venetian Feudal Lord Barbaro. Finally, there is Kazantzakis’ own opinion in his work, ‘Report to Greco’, which tells us that the name Varvaroi comes from those who remained after the slaughter by the soldiers of Nikephoros Phokas (Arabs, Saracens), who settled in some of the region’s villages, one of which was Varvaroi.

There are no Venetian building ruins in the village; however, according to the locals the Venetians used the labour of the villagers of Varvaroi in Heraklion for the construction of the Venetian walls. During Ottoman rule the locals suffered greatly, mainly because they were raided by the Ottoman residents of the next village, Astrakoi.

The village square is dominated by Nikos Kazantzakis Museum, founded by Giorgos Anemogiannis, the set and costume designer of Greek theatre. The museum is a modern well-organised cultural venue, paying tribute to the great intellectual, exhibiting his manuscripts and notes, publications of his works in various languages, rare photographs, mementos from his travels, personal objects, scale models, costumes and material from theatrical performances of his works, as well as many heirlooms that keep his memory alive and promote his work, life and personality. The author’s archives have been fully digitised and the large number of educational applications are constantly growing. The Museum is a global intellectual pilgrimage and it is no exaggeration to claim that it is reason enough for anyone to visit the region.

Myrtia is also the seat of the Cretan Literature Centre, the mission of which is to study and promote the work of Cretan authors, from the folk Byzantine tradition and Venetian Renaissance period to date. Activities organised by the Centre include numerous conferences on special topics and other events.

In the village there are many churches. There is Metamorphosis tou Sotira [Transfiguration of the Saviour], which is approximately 100 years old, Panagia (Evangelismos-Annunciation), which, tradition has it, was built in just 40 days due to pressure by the Ottomans, Agios Antonios (St. Anthony), Genethlia tis Theotokou (Nativity of the Virgin), who is the matron saint of the village.

In order to ensure he could travel, Kazantzakis used to work as a correspondent for Athenian newspapers. The texts of his correspondence are contained in five volumes under the general title ‘Taxidevontas’ (Travelling), and they are considered an excellent example of travelling literature.

Based on these travels of the great author, as recorded in the ‘Taxidevontas’ (Travelling) series, Nikos Kazantakis’ Museum (MNK) is starting in 2015 to ‘build’ a festival that will help people get to know countries and cultures that moved the author and inspired his works. The aim is to establish an annual art festival at Myrtia, where the audience will have the opportunity to ‘trace’ the travels of the great Cretan author and thinker through music, dance, drama and literature.

Those of you travelling in the region in July 2015 make sure to participate in the festival that is definitely going to reward you; the honoured country will be Spain.